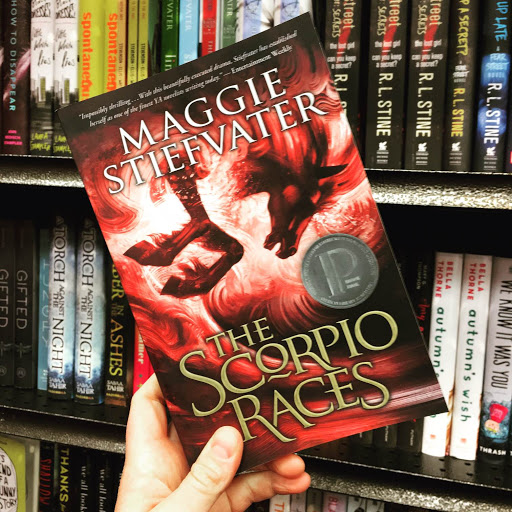 It is the first day of November and so, today, someone will die.

I say, “I will not be your weakness, Sean Kendrick.”
Now he looks at me. He says, very softly, “It’s late for that, Puck.”

I sought out The Scorpio Races in a mad fervor over Maggie Stiefvater’s writing after I’d finished reading The Raven Boys and The Dream Thieves and had to wait—very, very impatiently—for Blue Lily, Lily Blue. I wanted to read everything she’d ever written, because all of Maggie’s novels have a tendency to burrow their way deeply into my soul and stay there, like a cat that’s finally found its way back home. The Scorpio Races is a quiet but powerful novel about so many things at once—identity and responsibility and determination and adversity and love–oh, god, it is about love. I’m not talking about romantic love, here, although there’s a nice bit of that, too. This is about loving your family, warts and all; loving the place you’re from so hard that you hate it a little, too; the unconditional love between human and animal and the powerful bond that’s created there.

What is most amazing to me about this book is how believable it all feels. The temporality of this book is left to the reader’s imagination; it could take place in the 1950s, but it also is written in such a way that I wouldn’t be surprised to learn there is an island somewhere near Ireland where they race deadly, carnivorous water horses once a year. This is a story so poignant and profound that it leaves me weak-kneed simply thinking of it. Invoking its name will inevitably make me close my eyes and inhale deeply, struggling to contain the almost overwhelming surge of emotion I feel when I think about this book. Its touch is deceptively gentle, but it is strong. It holds you and doesn’t let go, and every time I come across it—at the library, in a bookstore, in the list of books on my Nook—my fingers itch for it, even though I have piles of unread books and a library holds list as long as both of my arms put together.

It says, “I will not be your weakness, Basia.”
My mouth twitches. I say, very softly, “It’s late for that, book.”

For a book about carnivorous water horses and raging storms, The Scorpio Races is subtle and smooth-tempered. It will come as no surprise that I love a book about horses (and love, and family, and community, and friendships blossoming into deep understanding…). It will come as even less a surprise that I love such a book set on an island so palpably Irish, especially as I had not even been home from Ireland a year when I first picked it up.

Everything about this book sung with the slight bittersweet whisper of home as I had known it in those months abroad: the sea, the island, the knobbly sweaters and, yes, even the carnivorous horses (having lived near the Irish Sea for four months, I can easily believe there might be such an island as Thisby where such beasts come ashore and are then, naturally, part of the annual races). It was all that I loved in Misty of Chincoteague when I was a little girl, and it was all that I’d come to love of Stiefvater in the months since discovering her work.

I mentioned that this is a book which no one should be surprised I love so whole-heartedly. That is true. The steady growth of understanding and admiration between Puck Connolly and Sean Kendrick would be enough of a reason to read, but there is also the growth of these two with their horses; of Puck with her siblings; of the inestimable George Holly’s good cheer and good sense and their influence. Stiefvater’s writing here evokes a timelessness that belies the idea of Thisby as fictional. After all, the island and the sea are as much a part of this book as any character–more so, in fact, than some–and the interactions between island and horse and capaill uisce (don’t ask me to pronounce that aloud; I’m horrid at Irish) and humans all revolve quite tightly around races that, while you can’t quite believe they do happen, you still can’t quite certainly say that they don’t.

There is a line in another favorite book of mine–The Night Circus by Erin Morgenstern–about stories which take up residence in our souls. This is one such for me.

4 thoughts on “get w(rec)’d: the scorpio races by maggie stiefvater”

W(REC)'D was created by two friends as a space to explore our love of reading and writing while juggling our Real World Responsibilities--working, the job market, being semi-functioning adults, brunch... You can find out more about W(REC)'D at our full site, wrecd.com.